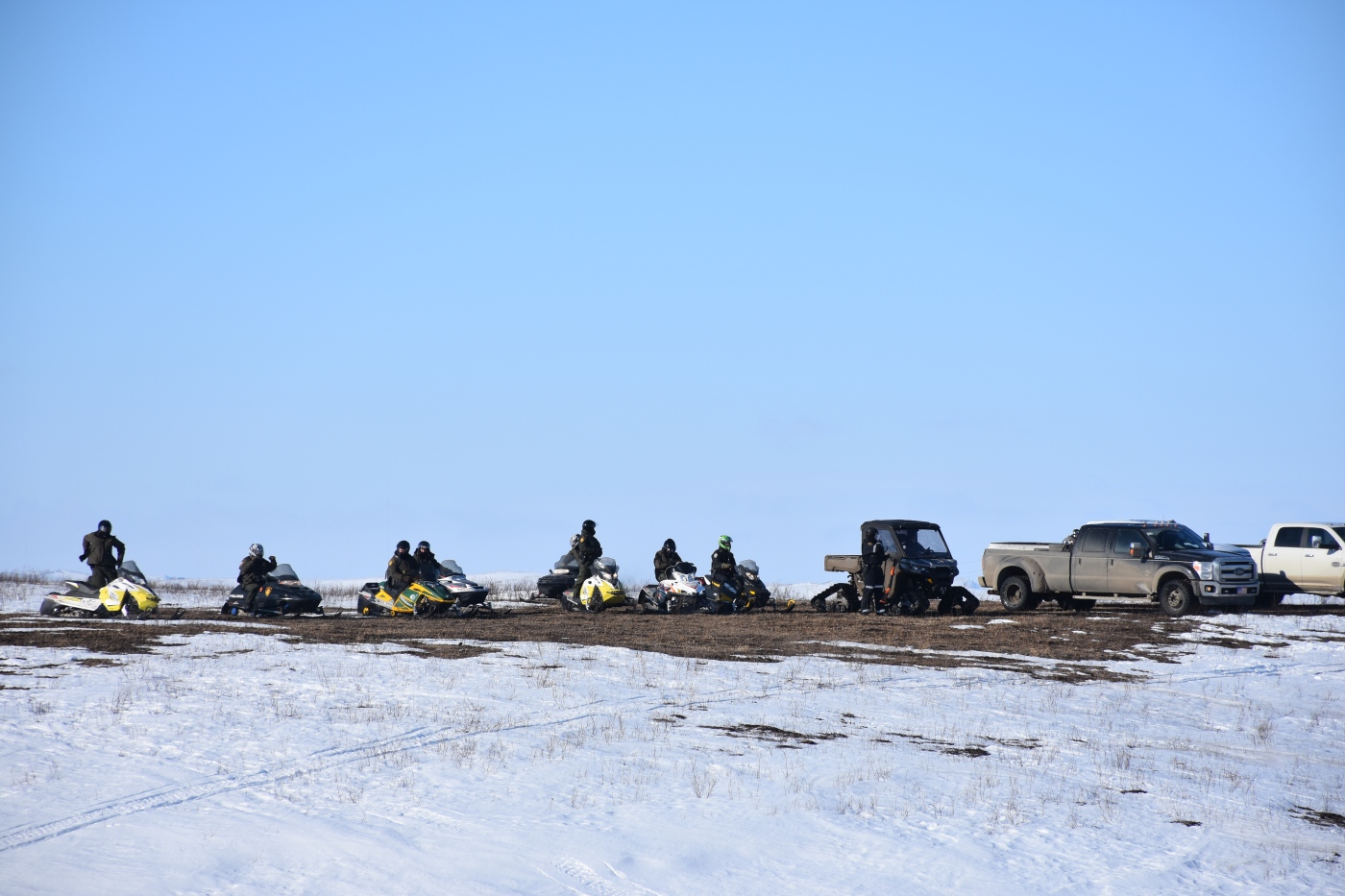 The conversation on treaty rights and water rights is rekindled by civil resistance at Oceti Oyate.

We could see the police forces amassing in the north of the Backwater Bridge on 1806 from Last Child Hill. The bridge was the site of the November 20th water cannon fight, and still loomed in our minds at Standing Rock. An entourage was crossing it now from our side. In the middle, Chase Iron Eyes could be seen in a red jacket. The police came out to meet him. The police told him, if we refused to leave the hill, everyone would be arrested – it was private property. Chase refused, and chose to make a stand on treaty land, as (in his words) a defiance of the violence corporate state.

My friend, Baby Blue Bird, gave me a telescope to see into the hills in the north. Our friend Spark, who worked as a stove installer, held ground alongside Zorro, the logistics guru (not their default names). I’d seen these people work and defend for months in deep admiration for their sacrifices and passion. There were hummers parked on multiple observation posts. Security forces on snowmobiles swooped back and forth in lower areas like flying monkeys over the white snow. It was a stunning view of the rolling North Dakota prairie. Overhead, a plane and helicopter swirled around us in the bright cloudless sky.

A white pickup was on fire at the entrance gate, blocking the entrance to the property, directly opposite the entrance to Oceti Oyate. The police came up 1806 in the east and from the gullies to the west, creating a tactical horseshoe shape around the seven odd tipis and some 60 people up on the hill. Water Protectors gathered on 1806 to stop the hummers and armored vehicles lead in by the troops. They were slowly pushed back, allowing the police access to the property where Chase Iron Eyes had directed his people to set up the tipis.

The units to the west moved closer now, riding snowmobiles and four-wheelers. Large trucks followed in kind. As their caravan came closer, one of their trucks slid off the road into a ditch and lodged the front end in a snowbank. Back on Last Child Hill, the prayer circle tightened, while others formed a barrier facing the west, arm in arm. My friends – Zorro, Spark, and Baby Blue Bird – victorious over their fears, and triumphant against their doubts, stood fast.

The wind stopped hurting our exposed skin after the numbness set in. I and the snowmobile driver waited, capturing what we could. The western forces moved to the hill across from us, separated by a saddle. Unsure how quickly they’d attack, we jumped on the snowmobile. I couldn’t feel my nose or chin as we rode into the gully and up the southern knoll.

It was clear the police intended to do this lightly – It was broad daylight and there were numerous cameras around. In a situation like this, cameras are what keep us safe. We stood on the hill as the police began to take down the razor wire guarding the property’s entrance.

A sheriff began to ride our way. We accelerated down the eastern slope at a precarious angle, leveled out, and maneuvered across the bulldozed snow at the bottom. The driver ripped past the entrance to the private property on contested treaty lands. At the wire fence we turned south. I got off, jumped the fence, and walked over to the crowd of Water Protectors. 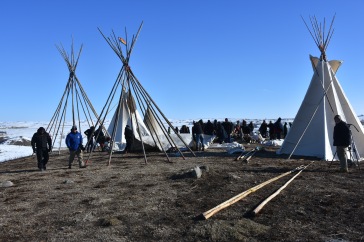 The police line cut a diagonal across the road. The police were lined up in riot gear at the center of the line. The LRAD sound cannon announced something to the effect of, “SUBJECTS, DO NOT APPROACH THE BRIDGE. SUBJECTS WHO APPROACH THE BRIDGE SHALL BE ARRESTED USING ANY NECESSARY FORCE.”

The voice was electronically altered in such a way that it seemed to penetrate the skin, strong high end frequencies with tight distortion.

I’d never been called a ‘subject’ before – did we have a king? Who ruled this fief anyway? 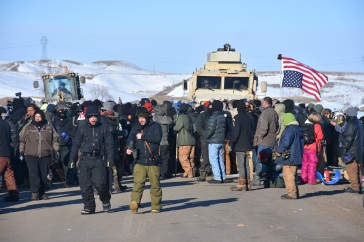 The crowd chanted and drummed. Many people spoke to the police, directing their rage toward them. Your children will be ashamed of you when they read history, they said. You shot my brother, yelled one man. You are state legislated terrorists, cried another. One man walked shirtless between the mob and the police and said nothing. All of the police ignored this. One cop down at the end conversed with people…

I don’t like violence – This is my job – We don’t want to hurt you.

A tractor pushed the extinguished burnt truck out of the way, then troops hopped on for a ride up a hill. The rest of the convoy stayed as two command vehicles drove to the base of the hill, along with two passenger vans for the subjects in prayer.

They closed in around them from the west and the south east. I was filled with shame, again, as I had many times before in actions here. I should be there! I thought. This is not an intelligent arrest, said my brain. Why is Chase doing this? How does this stop DAPL? How does it fix treaty rights? I put on my glasses and watched from the 1806 as they closed the circle around them.

A final warning was given – leave now, or face arrest.

My heart saw them being pulled down one by one. The sadness of it wrenched me. Good friends – people I knew and respected – one by one were pulled away from the fire on top of Last Child Hill. Tears fell from my fishing glasses, thinking about their bravery from the shoulder of 1806. The willingness to be arrested for breaking laws that (given our context) lacks moral weight, is one of the most heroic things I have ever witnessed.

Justice served to the subjects, but at Standing Rock, Justice is very subjective. 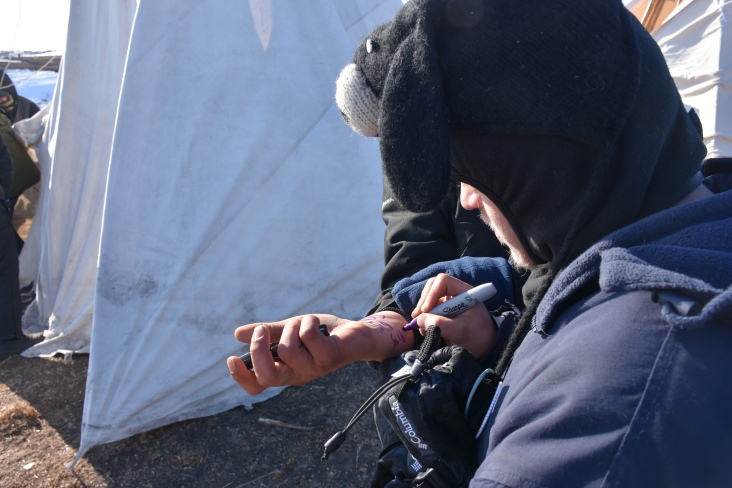 Water Protector writing the number for legal support prior to arrest.

Chase Iron Eyes wanted to make a statement (which I strongly recommend you hear) regarding treaty rights. He, along with some 60 other people, were arrested very carefully from their defiant, prayful postures. In camp, there are less people to help with cleanup – this author requests you join us to help – but do prepare to be fully self-sustaining, and do not come alone if you are not rugged. We need dedicated hearts and steadfast allies to bolster the absence of my friends, Zorro, Spark, and Baby Blue Bird, who followed their higher selves into the fight.

The spirits around camp are still strong, however there is the sense that it is unraveling now that the heavy machinery is removing ground debris left by campers. Up the road, the Cheyenne River Camp is being cleared for occupation to continue the fight against the Dakota Access Pipeline.

The actions of Chase Iron Eyes were condemned by the Standing Rock Sioux Tribal Council, as renegade efforts unrelated to stopping Dakota Access. The opening of Backwater Bridge, according to a statement released by Morton County, will proceed provided no more civil disobedience occurs.

Everyone wants to know if there will be more actions, and if so, to what end? Chase took 60-75 of the camp with him to jail, however, 1/5th to 1/3rd of the camp believed in his message. Although Chase does not speak for the entire camp, he was willing to face arrest along with his fellow Water Protectors, and for that I have respect.

After this piece was published I received criticism for singling out Chase IronEyes as the leader of this action. It was pointed out to me that everyone up on the hill that day was acting under their own guidance, in the belief that standing there was an important part of stopping DAPL, or defending treaty rights. I based my assumption of Chase’s leadership on testimony from persons present, Chase’s Facebook post regarding the action, and a video statement by Chase.

I reached out to him after he was released but did not receive a statement. I should also note that anyone who claims leadership in resistance movements are automatically targeted, and for that I do apologize for not moderating my acknowledgement of Chase’s leadership capacity with an equal dose of acknowledgement toward the other 70 people on the hill who have free wills and think for themselves.